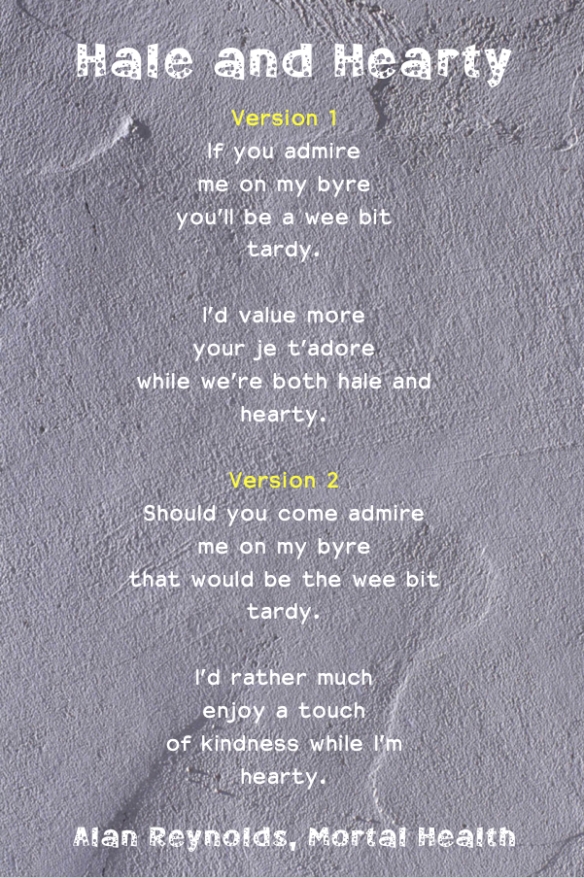 to no one. Without replacements you forget.
Commemorative plaques give way to Plaque
Forgetful, and it is not over yet.
First memory, then muscles — the attack

moves on until the person who was you
subsides into a shadow form that leaves
but little more than molecules and glue
of the who it was your faithful lover grieves.

No one can stop the hell there is to pay
when janitors grow old, retire, can’t play.

————–
Hooray, they’ve found the key to keep our minds
preserved from dying at Alzheimer’s hands:
They’ve identified the janitorial kinds
of cells we share with worm C. elegans.

The scientists are cautious, but the press
exults as if they’ve found the holy grail.
A little worm shall lead us, they profess,
and if it does not, others in the pail

will serve to break Death’s hold on human brains.
With memories intact we shall not die!
The ONLY standing hurdle that remains
will fall, now we’ve the key with which to pry

our freedom from Alzheimer’s mortal clock.
Now ALL that’s left to do is find the lock.

The inspiration for this pair of sonnets was an AP article “Cleanup Crew Clears Way for Research. Scientists have discovered molecular janitors [one of these proteins is named HSF-1, and another is called DAF-16] that clear away a sticky protein that plays a role in Alzheimer’s disease until they get old and quit sweeping up. The finding helps explain why Alzheimer’s is a disease of aging. More importantly, it suggests a potential new weapon: drugs that give nature’s cleanup crews a boost….”

It’s 3 AM. The therapy: hold a book
that I can read but won’t if I turn on the light
is working, is that therapy, although it took
at 2:45 all of my will and might
to keep the room too dark to read or write.
I ride loose thoughts that float to where it’s day,
to Tokyo, Seoul, Rangoon, Bombay:
so many places and people, a gazillion flies.
It’s 3:45. Morpheus tells me it’s okay,
and that he can’t sleep no matter what he tries.