It is fun and new for me to have an ebook on Amazon I put my first one ever there on July 1. As a paperback it would take time for DREAM STARS to get around. But I hear the ebook has already been downloaded and read in far-apart places: Amsterdam, Colorado, England, Alabama, Ecuador …

It is almost midnight. She reads rules of Spanish grammar
in Dutch. This lets her fall almost asleep
until she wonders, what rhymes with ‘soporific’
and her mind’s off to the races. Ballads clash
with terse short-footed lines
in epics she remembers or might write
a dozen times again, each time forgetting
that she needs the sleep that’s purchased with the boredom
she can only find in studying grammar rules.

It takes forever to read a book of poetry
and twice that long to read a single poem.
Poems’ words are more than vehicles for stories.
They work – or don’t – on levels and dimensions
the poet may wish but they themselves decide.

This poem is for Manuel van Loggem
who gave me pleasure with his meagre book
Letternijen that I read in from time to time
even some evenings before he died.
I liked his provoke-verbs, his sour tales,
his animals, and his japes at literature.
While they survive him in his book, perhaps some Where
exists where Manuel learns whether curse or prayer
worked better. As to which, I wish him well.

Translations:
1. Me: Is there life after death? / God: Come on, you can see for yourself. 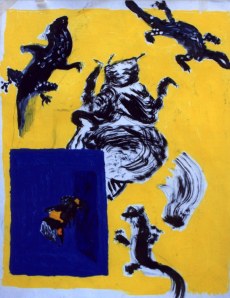 These rough-drawn salamanders symbolise
the patient grace of Gaia as she pours
our molecules, in always-new reprise
of forms and folds and patterns she adores.

This bee, who’s dead, or sleeping in this box,
epitomises Gaia’s gayer pranks.
He’s sniffed the flowers, flown above the flocks
of sheep in April; gambolled near their flanks.

He bet he’d last the summer, and he might,
but only on this canvas, stretched and sketched.
Perhaps he’ll be recycled as raw light.
A full reincarnation? Too farfetched.

We dance in patterns we cannot perceive
but Gaia does, and pets us when we grieve.

Originally a 19th century silkworm nursery, the now legendary artists’ retreat ‘Beauregard’ in southern France nestled among vineyards, forests and Celtic ruins. It was where the artist Leo Musch (1943 — 2013) gave wonderful summer lessons, inspiration, and lodging to painters and sculptors.
One July morning Leo assigned a project where we were to paint something showing motion whilst leaving an empty rectangle somewhere in our paintings. He would tell us later how to use the rectangle. I covered my large sheet of gesso-treated paper with acrylic sketches of some lizards I watched playing, and of a bumble bee that fell and lay still on a table where I had been having coffee under the trees. I carried the bee around with me in a metal box, feeling he might have been sent to me as a model. Leo reviewed the pictures and instructed us to make different but related paintings in the reserved rectangles, showing some theme that would relate the two parts of the work. I sketched the bee (about twenty times) on other paper, then painted him in the rectangle, in a three-dimensional box that looked out into other space and time. Then I wrote ‘Les Uns et Les Autres’ to accompany my painting.

The question whether poetry still matters
is jejune this April as it ever may
become or was. Illogic in it shatters
all hope of answer. Fitful fey things pay
silly devils to say there’ll be hail to play
with in the desert, before poetry
begins (or stops) to matter to the free
and gloriously inequitable curse
of prose that’s lifted high enough to be
poetic tropes. It could always be verse.

We are chipmunks, or we would be were we wiser,
dashing hither dither darting till we die.
We race telling stories none of us remember
how often they were told or when or why.
The wind stirs leaves we fancy are emotions.
A truth on Monday Tuesday is a lie.
We learn sharp nostalgia when we leave the nest
then forget that too that way we do the rest.