The demolition of the old house, less sad today
as it progresses so far we do not recognise
the home it was, reminds you, you say, of how old people
get by the years deprived of what they were
until when they eventually depart
what dies with them is not enough to grieve.

‘You are young,’ I answer. ‘You are fixated on the world
of appearances that young eyes find important.
A pimple or a wrinkly weathered skin
is what you see and think that’s all of life.
The spiritual, if ever, arrives late.
All souls take time to learn to meditate
and, unconcerned with ego, to align
themselves with the notes enriching Nature’s tunes.’

He had retired, a long-expected dream.
Not one he’d liked, but still it had occurred,
and now, instead of generating steam
for projects where he had the final word
and spending evenings building up his team,
he waked when he could sleep, and found absurd
his days containing only three events,
unless he counted going to the Gents.

He tried to paint, a vagabond from rules
he’d built for thirty years, but could not draw
the curtains yet. He’d founded schools
for analysing worlds, but could not claw
his way with chalk. His sketches looked like drools
debility might bring to him. His flaw
was that his visions failed to make the paper.
He threw his easel out, a useless caper.

He joined a gym to taper down his waste
and exercised his options to get fit.
The girls he met there showed no urgent haste
to join him in his exercise, emit
admiring ooh la la’s. They were not chased
by hormones in his case. No need to flit
about and waste a ‘hi’ — this wispy weighting lad
was old enough to be their uncle’s dad.

He persevered, with moxie built from years
of start-ups masterminded, funds and all,
by his enthusiastic drive. With cheers
and grunts he hailed the savage wake-up call
he’d set himself for five. He gave up beers
and fatty foods, embraced a volleyball,
and sallied forth with quotas as of old.
It lasted fifteen days. He caught a cold.

Recuperating fast, he took up games
limiting himself on purpose to just three.
All games he’d played, he still knew all their names
and half their rules. He paid the entrance fee
required for each sport’s club, and suffered shames
he hadn’t know before. He couldn’t see
four moves ahead. This forced him to confess
he’d lost his touch, or never had finesse.

A sailing yacht soon tied up at his dock.
He put on Mephisto boat shoes every dawn
and polished brass and teak until the clock
announced with bells across his perfect lawn
the cocktail hour. He buffed the starboard chock
before he took a drink. It made him yawn
and wonder what it was he felt he’d lost
now he was free and quiet. No longer boss.

It is fun and new for me to have an ebook on Amazon I put my first one ever there on July 1. As a paperback it would take time for DREAM STARS to get around. But I hear the ebook has already been downloaded and read in far-apart places: Amsterdam, Colorado, England, Alabama, Ecuador … 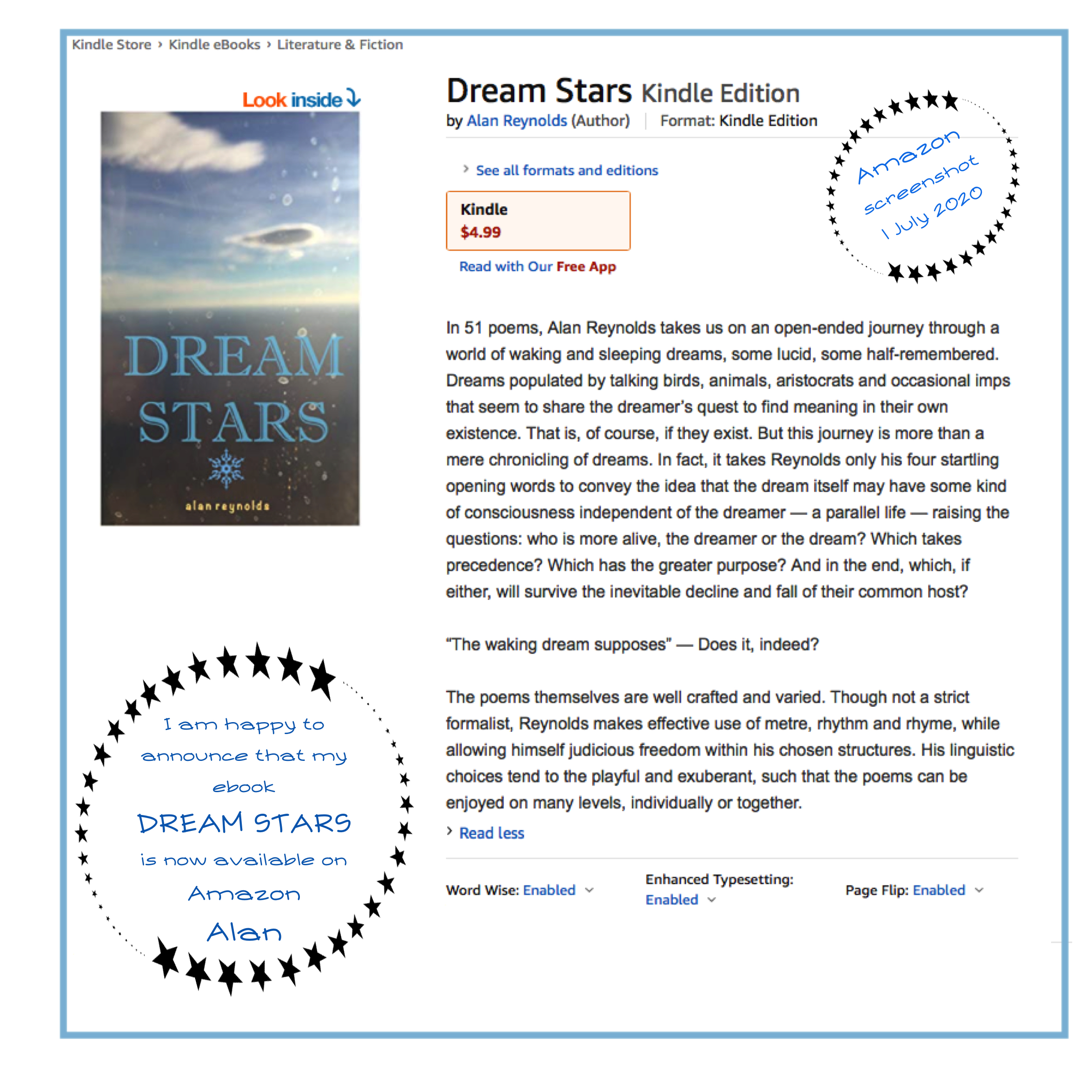 They are more frequent, and increasing in duration,
these blackouts blinkering Bernard’s sense of self.
Less often taxed by bouts of cogitation,
his brain retrains, inviting him to delve
into the subject matters that still matter:
the good life, what it is, and how to spend
what’s left of it. Bright shards of thinking flatter
old Bernard into thinking he may end

up well, and, if he’s lucky, not today.
He imagines what shines on him are not stars,
but that he’s seeing nascent angels play.

He’s not grown up in the accepted sense,
he thanks his stars neotenously. He wets
his whistle with Glenlivet and spring water

and quotes from his own diary’s scuffed, foxed notes:
‘We are by nature fragile and capricious.
Unempathetic. We fantasise we’re gods.’

Our geriatric acrobatic dance,
our subtle art, goes sometimes undiscerned
by passers-by. And by you too. Your glance,
pale pilot flame from passions banked, has turned
my head for decades, and today. The trance
the orderlies assume I’m in is one I’ve learned,
to masquerade my yearnings. They run sweet,
while I doze sitting, silent. I’m discreet.

What dreams survive the dustiness of age?
Why, all of them! In ageing they go prime.
While teenage angst is best at muffled rage
and young adults excel at hustling time,
it’s old decrepitude that’s fit to climb
beyond the cage of flesh and sniff the stars.
Dim-eyed beholders best see what is wild,
anticipate where wheelchairs outpace cars.
It takes the wear of years to free the child.

The crows cruise by the church in close formation.
They bank in search of something I can’t see.
My years on earth, less hard to count than crows
against the sun as the flock flies by at speed,
accelerate until whole decades pass
in days through spaces that had taken years
to navigate the first time, then they’re gone.